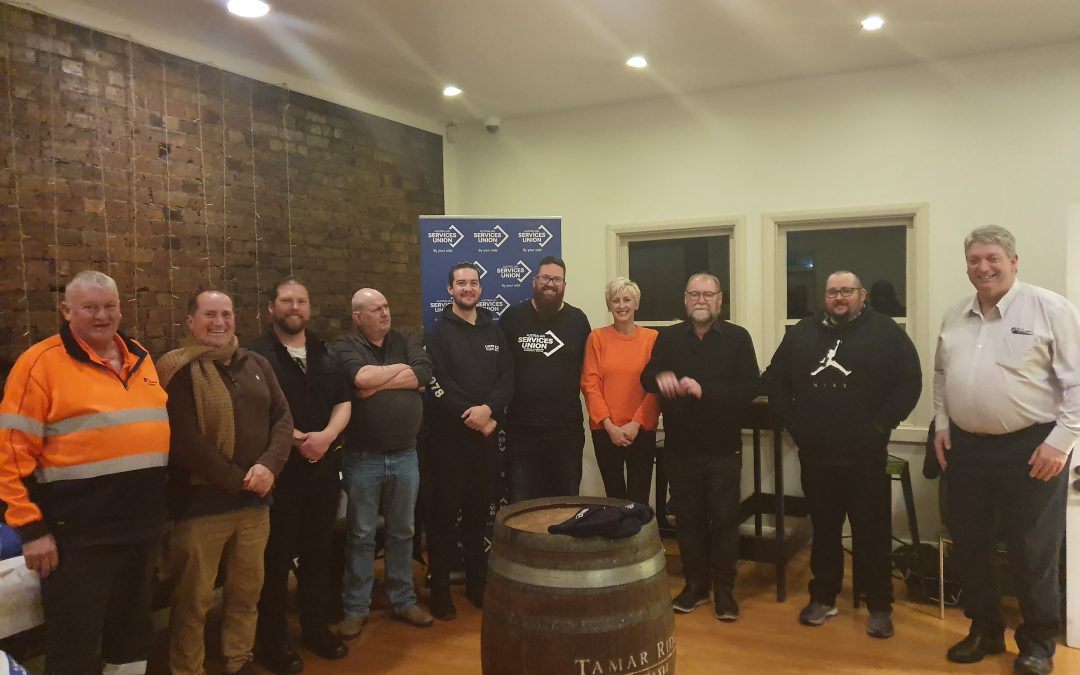 The ASU is always there for members. The union is there when you need assistance, there with support, and available to members no matter in which part of the state they live.

In addition to members’ meetings and visits to dozens of worksites each week, we’ve recently held member forums across the state.

In each of the regions, ASU members have come together to hear what’s happening in our industries and hear from some great speakers on union campaigns and win in other industries.

In the north, union activists from Troy Edwards and Jarrod Ennis at Statewide Independent Wholesalers spoke about their struggle to recruit new members and to campaign to win in enterprise bargaining. They spoke about the strength of collective action and inspired those who attended to go back to work and discuss the union with their colleagues.

Barry from Simplot spoke to our members in Burnie about the dreadful way he was sacked, and the successful campaign that he and his union ran to win his reinstatement; not once, but twice.

And in Hobart, AMWU Organiser Jacob Batt spoke about his members from Cadbury and their campaign that went all the way to the High Court of Australia over sick leave entitlements for shift workers.

An exciting part of the final forum was a ‘draw from the hat’ of a new ASU member who joined during May and June during our membership competition.

The winner of a $200 fuel voucher was Sarah Holloway from McGrath & Co Lawyers.

Keep an eye out for our next member forums, meetings or get-togethers for ASU members and come along.

Even though the competition has finished, it’s always a great time to encourage workmates to join the ASU. It’s easy for anyone to join online at www.asu.asn.au/asujoin

Excellent Friday morning spent with ASU Vic/Tas and ASU Victorian Private Sector Union delegates from across Victoria and Tasmania in a Roundtable discussion with Senator Linda White on priorities for the upcoming Jobs and Skills Summit. Excellent representation both online and in person from local government, community services, airlines, libraries, public and private sectors. So many similarities with plenty to contribute to this important upcoming event. We look forward to seeing progress! ... See MoreSee Less

As the Eastern Regional Libraries fail to address the concerns of its staff, workers have decided to take industrial action.

As such, the ASU have notified ERL of the following actions which have commenced on Thursday the 18th of August:

-Interrupting or stopping work to hand out union flyers and to speak to library users and members of the public about the EBA campaign.

-Interrupting or stopping work to make EBA campaign related announcements in the branch.

-Interrupting or stopping work during Storytime to talk to parents and library users about the EBA Campaign.

-An indefinite or periodic ban on attending meetings and/or completing documents relating to the annual review process.

-Interrupting or stopping work to write messages about the EBA campaign on DLO and Flexi Vans.

-An indefinite or periodic ban on inputting reports and statistics.

-An indefinite or periodic ban on producing materials regarding enterprise bargaining for the employer.

Derwent Valley Council has been accused of disrespecting staff by keeping early childhood educators at Valley Children's Centre in the dark about their employment future.

According to Australian Services Union organiser Samantha Batchelor, the decision to keep staff in the dark was typical of a council that has shown so little regard for early childhood workers. ... See MoreSee Less