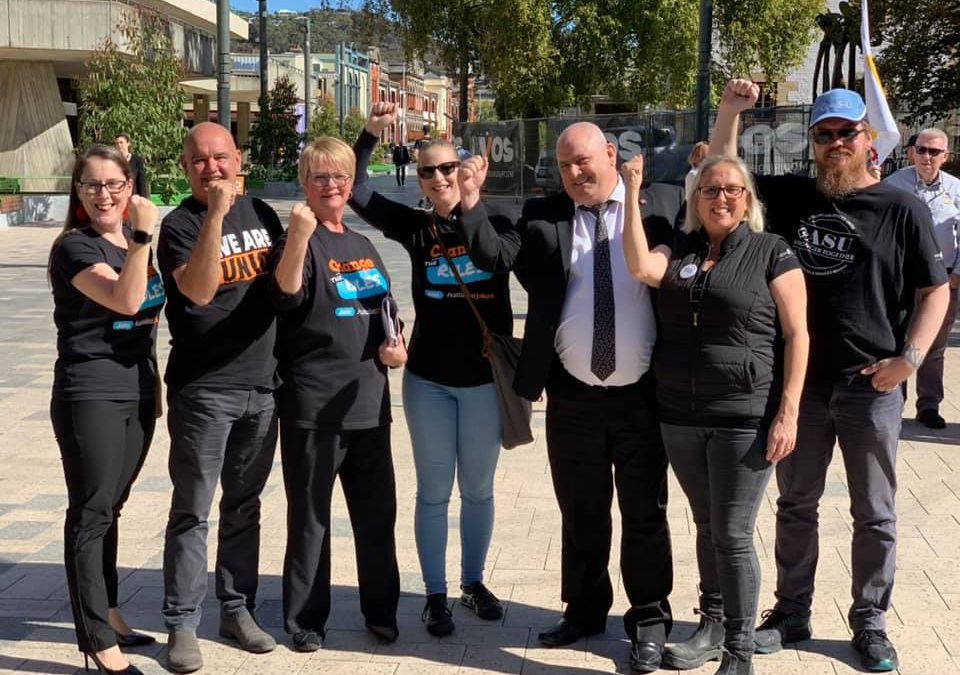 In Stuart’s own words.

First union I joined was the AMWEU back in 1989 when I left the military and was still on the tools.  The labourers on the site were the old FEDFA being run by Mike Grey.  They were hard boys and not to be messed with, but staunch when it came to supporting us in industrial action.

Changed jobs and went to Bell Bay where I joined the FIA.  Spent two years there as a delegate.  This was before EBA’s so we were negotiating an award.  It was also before OH&S so a lot of the union work was around safety.

Gave the tools away and went to university, studied industrial relations and employment law as part of a Commerce degree.

My first EBA negation was back in 1992 on the state based system.  Since joining Council I’ve been involved in 8 EBA negotiations as they have the Aquatic on a separate agreement.

Union membership is as important now as it ever was.  We’ve got the most draconian industrial laws in the western world and numbers are the only way to change this.

People need to be made aware that the terms and conditions of employment that they take for granted were fought for, at time in the literal sense, by organised labour.

These conditions are under constant threat from a management elite that take all the rewards and none of the risk.

It’s the end of the financial year and there are lots of things to get excited for!

The minimum wage will increase by 5.2% and employers will be required to make superannuation contributions regardless of how much an employee earns, and of course your union dues remain fully tax deductible!

ASU members who pay by direct debit will receive your tax statements by the end of next week, if you pay through payroll deduction your membership fee deduction will appear on your group certificate.

Union members meet a Trades Hall at 11.30am.

Wins for ASU members at CFA!

ASU members and delegates at the CFA demonstrate the vital role of workplace activism in making workplaces safer for all workers.
They have bravely pushed for an investigation into workplace culture after the legal suppression of a previous report. And ASU members lobbied hard for District Mechanical Officers to have presumptive rights because of the exposure to toxic environments and chemicals that are part of their work.

They recently took the same activism to the barraging table when negotiating a new PTA Enterprise Agreement. As a result, they were able to remove unfair restrictions on the type of work they could do during emergencies.
In the face of strong opposition, including a legal challenge in the Federal Court, this significant change only happened because of the relentless work of ASU delegates and members.
Because the ASU’s negotiating team’s efforts were supported by CFA workers, the victory in the ballot for the new PTA Enterprise Agreement was overwhelming.

This is another excellent example of workplace leadership from ASU delegates and steely resolve from active ASU members. Huge congratulations to everyone involved. ... See MoreSee Less