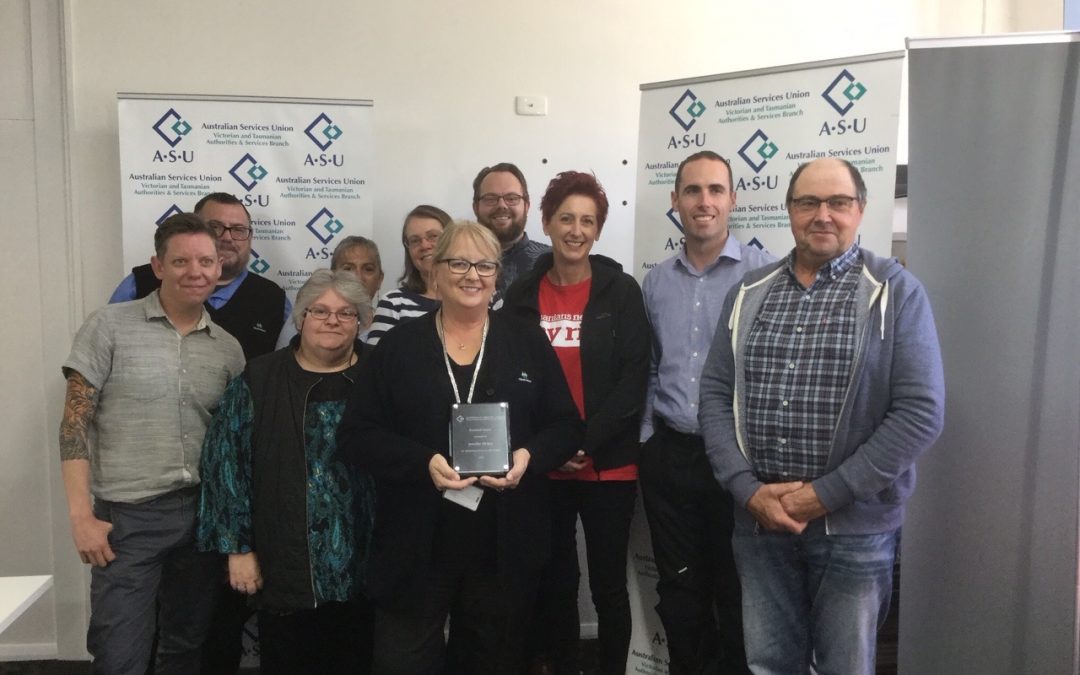 This month’s Delegate profile comes from Jenni Hickey from City of Hobart. Jenni has been a member of the ASU since 2003, shortly after gaining employment as an Administrative Officer and has been an ASU Delegate for almost four years.

Jenni says that her union beliefs were drilled into her from a young age by her parents. They always encouraged her to become a union member so she would have protection and support within the workplace.

“I decided to become a Union Delegate so I could fight for the rights of my fellow members and employees with a commonality towards fighting against injustices and prejudices” she says.

“During my time as a Union Delegate I have attended rallies supporting many issues including the International Women’s Day March.  To see the camaraderie and unity between members and union staff supporting all workers is nothing short of amazing”.

Jenni has attend two ASU Branch Conferences, was awarded the ASU’s Tasmanian Bracknell Award for outstanding service to ASU women, attended countless ASU Active Member Forums and Unions Tasmania events as well as the Unions Tasmania Women’s Conference where she had the opportunity to meet many strong and amazing women.

Jenni says that the Union family is very supportive and welcoming and there are many opportunities to come together and share information and experiences to further build on our fight for unity, solidarity and fair work conditions for all.

After experiencing enterprise bargaining at City of Hobart, Jenni says “there is clear evidence that fully unionised workplaces achieve better outcomes, and being part of the Union gives me a sense of achievement to be able to fight for the rights of union members and other employees”.

Workers have carried Australia through the pandemic.

We need politicians to realise that workers are the hidden heroes of this crisis, and that we will not accept cuts to working conditions.

Head to www.fortheworkers.org.au to find out more about how you can help. ... See MoreSee Less

This is what workers using their collective strength to protect their interests and get better outcomes looks like.

Well done to the delegates at Manningham City Council's depot who brought together members this week for an important workplace meeting.

Steve and Jason are a couple of ASU Proud delegates pictured sporting their ASU masks, hats and even an ASU KeepCup.

Thanks also to Steve B, Jason, Peter and Steve T! ... See MoreSee Less

Thank you to Minister for Local Government Shaun Leane MP for meeting with ASU local government delegates from across Victoria today.

It was great to hear from the minister on his plans for the portfolio, and his reflections on local government.