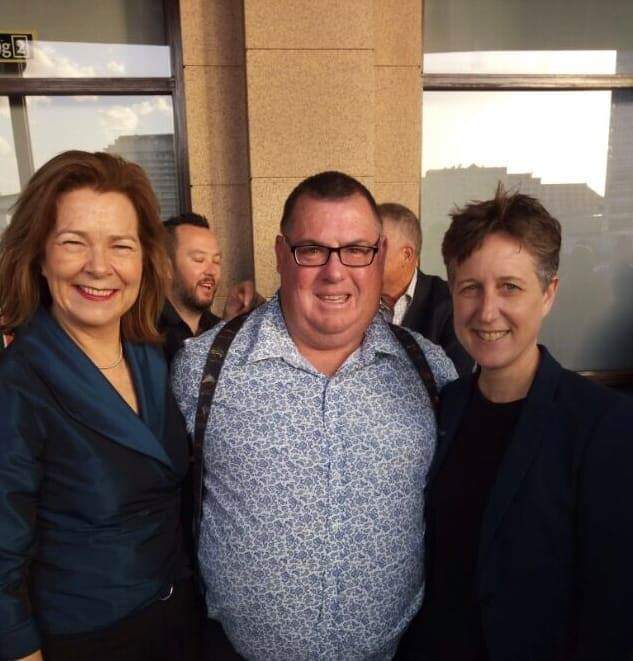 My name is James Mackay and I have been a member of the Municipal Employees Union which became part of the Australian Services Union for nearly 33 years.  I have always been a Union member and in the past have joined the Australian Workers Union and The Liquor and Allied Trades Union.

I have always been an activist of some sort.  At a young age, I was part of the protest about the flooding of Lake Pedder.  I count myself lucky to have flown into and land on the beach at Lake Pedder to witness its natural and unique beauty in the early 1970s before it was flooded.

I was very active in the Franklin Campaign (and was even arrested at Warner’s Landing), Nuclear Disarming, Wilderness preservation and other environmental causes until I eventually came disillusioned by some of the more radical actions taken by some activists.  Although I am still green orientated, I feel there needs a balance between creating/saving jobs and protecting the environment.  For example, I support the local timber industry for building and craft wood timber, but not the wholesale destruction of forestry areas for woodchips.

I have been employed by Hobart City Council as a Horticulturalist since March 1988 and I joined the ASU on the day I started work.  At that time the outside workforce was 100% MEU as it was a closed shop.  Trevor Cordwell was MEU Secretary and later ASU TasmaniaSsecretary.

The Union delegate who signed me up was also my foreman.  I didn’t believe he should be doing both jobs so I wasn`t very active in the Union at that stage due to a number of disagreements I had with this gentleman.

I cruised along just doing my work, playing sport and fly fishing until 2005 when I was inspired to become more active again because of John Howard’s ‘Work Choice’s legislature.  I have always believed in workers’ rights and safety.  I could see that this legislation was a serious threat, not only to workers but all people on a lower socio-economic background.  As we had no delegate in our workplace, I was elected and became active again, this time for workers’ rights.

‘Work Choices’ was a great time to be involved as the number of people attending rallies was almost as large as at the Franklin rallies.

In 2007/2008 Sean Kelly was Secretary of ASU Tasmania, and I am sad to say, the ASU in Tasmania wasn`t in a good place. With help from the National Office and the Victorian branch, an amalgamation was offered to the Tasmanian branch which was eventually accepted and so we became the VicTas branch.

To have seen where this Union has grown in roughly ten years has been awesome. We now have a completely Tasmanian team of Organisers all of whom are doing a fantastic job providing service to our members.  Our closer ties with Unions Tasmania is giving us a number of new opportunities to grow and interact with potential members.

Outside of work I am married to Sharon who is also an ASU member and we live in a small cottage with a big garden in the Northern burbs of Hobart.  We have almost completed a full renovation on the cottage, including adding a large extension of new room and covered deck, and now we are getting stuck into the garden, and caring for our flowering plants, fruit trees and veggie patch.  As well as taking care of our two chooks, two dogs and a Burmese cat, I have recently acquired a beehive and have become quite obsessed with these wonderful creatures.  I am an avid fisherman, with fly fishing for trout and lure casting for bream being my great love in this sport.  I love attending live music and theatre events both here in Tasmania and in Melbourne.

Yours in Solidarity
James Mackay

Companies making personal protective equipment, including Melbourne-based multinational Ansell, have made record profits during the pandemic.

And there's something you can do right now - put this International Public Meeting in your diary.

Come to this meeting to hear first hand from workers in the PPE supply chain, along with worker rights specialists – and discuss how to build solidarity.

All the details of this online meeting are available here: sites.google.com/view/ansell-solidarity

To get better informed this short video summarises some of the issues facing workers at Ansell and in the PPE industry generally www.youtube.com/watch?v=rKEbsA2bSxk ... See MoreSee Less

After taking industrial action (hampered by members of a non-union association), ASU members at Moorabool Shire Council got a better deal for workers in the next enterprise agreement.

They saw off an attack on their workplace conditions and even made some real improvements to workers rights at Moorabool. On top of that, a pay rise that will make the biggest difference to the lowest-paid workers at council.

Congratulations to ASU members who took action and attended meetings that set the direction of our bargaining.

And a huge thank you to each of our delegates at Moorabool – they are the best of our union. ... See MoreSee Less

Hardly a good outcome when many at Council would be taking a pay cut each year when you take into account inflation. Too many are left behind, certainly has not benefited the entire membership.

Fantastic work, well done to the members of the ASU in Moorabool! 👏 👊

Great outcome. Congratulations to the workers in Moorabool

How great to hear!! Amazing job!

Congratulations, Comrades. This shows why unions are essential!

You mean the other association that is a union who also supported the your members? Not very professional of ASU to bad mouth other unions just because ex members went to them when you weren't supporting them.

Great outcome, sends a warning shot to other Councils that they can't offer below 2% ✊

Amazing work! Great to show those scabs what workers can achieve when they're not licking boots