In 2012 ASU members won pay rises of between 23% and 45% after a long-fought campaign to address low wages in the community sector. The campaign supported the union’s other efforts running an Equal Pay case at the Fair Work Commission.

The Fair Work Commission ordered that the Equal Pay increases on our Award wages were to be phased in over eight years – with the final instalment due in December 2020.

These increases were won because of a campaign fought by ASU members.

The Fair Work Commission agreed with the ASU that:

We won the argument in the Fair Work Commission and we also won billions of dollars in state and federal government funding to cover the costs of these wage increases.

It was a historic victory for all workers in our sector – thanks to union members.

WHAT DOES EQUAL PAY MEAN FOR YOU?

Twice every year since 2012 our minimum rates of pay have increased.

The July increase is  due to the Annual Wage Review, and the December increase is because of our Equal Pay win.

Members are currently better-off by between $112 and $575 each week because of the Equal Pay campaign and decision.

Here’s how Equal Pay has made a difference to two ASU member’s weekly pay. 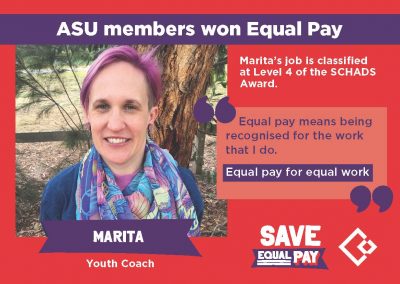 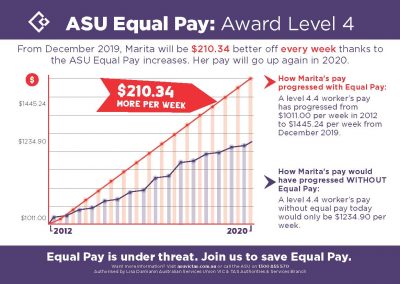 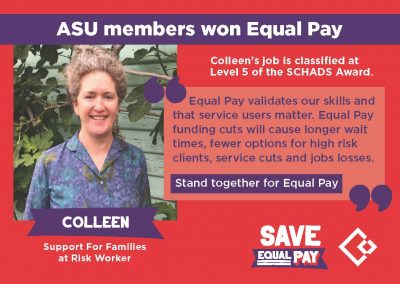 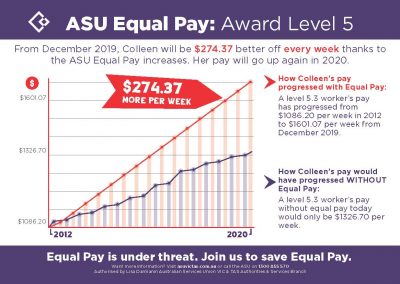 When ASU members won Equal Pay, state and federal governments set aside special funds to cover our new higher rates of pay. This guaranteed funding until 2020.

The increases awarded by the Fair Work Commission in our Equal Pay case are the legal minimum rates of pay.

By law, you cannot be paid less.

Now it’s clear that many federal government departments have not budgeted to lift program funding beyond December 2020. This reverses all the gains of the last 8 years.

The Morrison Government has now confirmed that it plans to cut equal pay funding from commonwealth funded programs after December this year. You can download the letter from the Department of Social Services here.

We know how budget cycles work, and the reliance of the sector on secure government funding. And our members want sustainable quality jobs.

If Equal Pay is not funded, jobs and services will be under threat.

We fought to win Equal Pay, we will fight to protect it!

HOW TO HELP SAVE JOBS AND SERVICES

Join the campaign to Save Equal Pay

It was only when workers joined together in 2012 that we won Equal Pay. We can do it again by standing together! Join us to save Equal Pay. www.asu.asn.au/asujoin

2. Pass a resolution in your workplace

Pass a resolution in your workplace committing to be part of the campaign.

3. Take action in your local community

Take action in your local community in support of the campaign to save services, save jobs and save Equal Pay!

4. Come along to a Save Equal Pay campaign meeting

Campaign meetings are held monthly – contact the ASU office to find out when the next one is happening, and get involved in planning the campaign.

5. Ask your employer to sign a statement of support.

See link in the downloadables section below – we’re asking employers to stand with workers to save jobs and services.

6. Take a selfie with our sign “What does Equal Pay mean to you?”

Take a selfie with our sign “What does Equal Pay mean to you?” and send it in – so we can keep spreading the word on social media. Check out the ASU Facebook page for these pics and supporters from across the sector.

Share them at your workplace and across your community sector networks!

If you want more information or to set up a meeting at your workplace contact
ASU Member Contact Centre | 1300 855 570 | info@asuvictas.com.au

Stay in touch with the ASU and check out campaign activities at https://www.facebook.com/ASUVicTas/

TO HELP YOU CAMPAIGN: 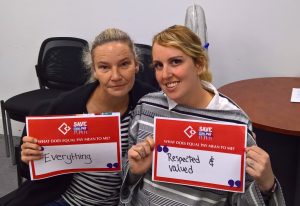 The ASU office, ASU delegates and members have been contacting employers and others to seek their support to Save Equal Pay and sign a pledge.

By pledging to support the campaign signatories agree to give the union access to the workplace/s to provide campaign information to staff, support union members’ participation of in campaign activities and

advocate in support of this campaign. The pledge template is downloadable below if you’d like to follow up at your workplace. If you’d like a hand with that just contact the union office or your organiser.

“Unions have welcomed a pledge from the government it will aim to end the practice of employers axing enterprise agreements in order to cut the pay of workers.

In a major speech to the Australian Industry Group on Monday, Workplace Relations Minister Tony Burke said such moves by employers could not be justified.” ... See MoreSee Less