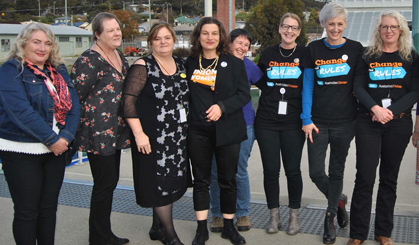 An impressive delegation of Tasmanian ASU women joined over 100 women unionists from across Tasmania in Hobart for the Unions Tasmania ‘Change the Rules for Working Women’ Conference.

Attendees were joined by new ACTU President, Michele O’Neil, on her first visit to Tasmania since her election in July.

Support for the Change the Rules campaign in Tasmania continues to grow following record numbers at this year’s May Day rally and activities during the Braddon by-election where union volunteers spoke to thousands of constituents about the campaign to win more secure jobs and better pay.

Key elements of Change the Rules campaign seek to address gender equality and pay equity which will be a focus of the Conference.

“Women are consistently undervalued, underpaid and discriminated against for having children. They are over-represented in insecure, low paid work. Women retire with 47% less superannuation in their accounts than men and they are increasingly retiring in poverty,” said Unions Tasmania Secretary, Jessica Munday.

“The rules at work have never really worked for women. We just marked Equal Pay Day last week which revealed the national gender pay gap as 14.6%, a gap that we’ve failed to significantly decrease in decades.”

“Tasmanian women need a pay rise. They are earning, on average, $4,748 per annum less than the average Tasmanian wage and a whopping $15,475 than the national average wage. This isn’t good enough and illustrates how important changing the rules at work will be for women,” said Ms Munday.