A win at Maribyrnong 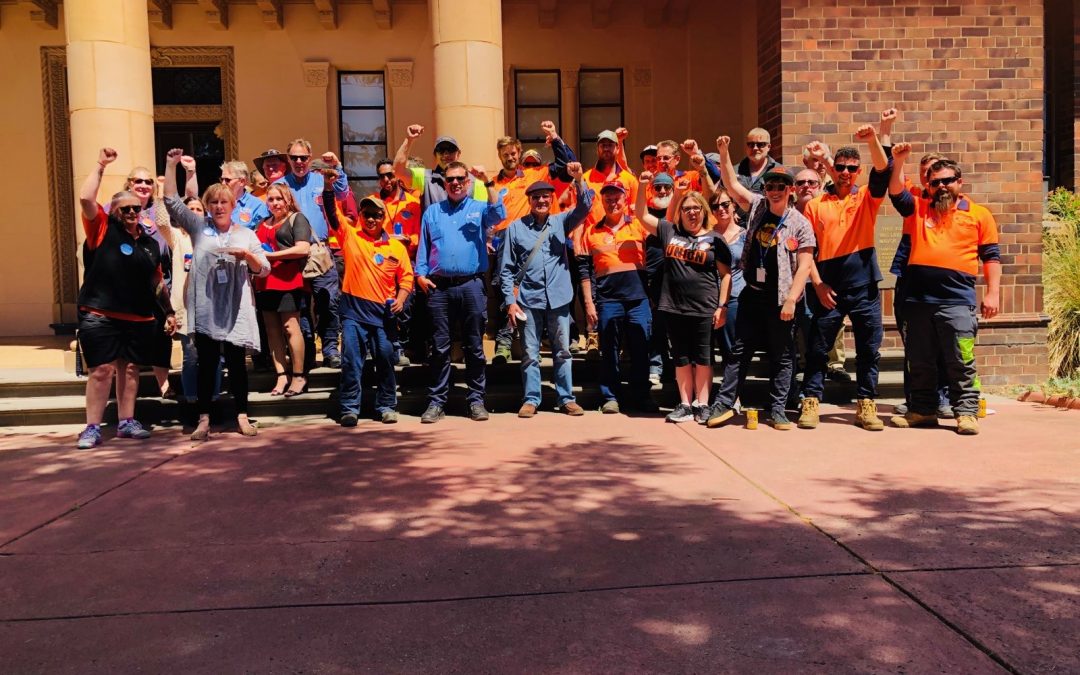 ASU Members at Maribyrnong Council have had a major win in their enterprise agreement negotiations.

Just last week they voted to accept in principle management’s latest offer, which includes no reductions to entitlements, pay increases of 2.5% in the first year, 2.25% in the second and third year, or, an extra $30 per week, whichever is higher. The offer also includes more accountability around the use of agency and labour hire staff, meaning that members at Maribyrnong will have a secure workforce for years to come.

The bargaining representatives have had a long and tough negotiation, with a hostile management that was determined to avoid any conversation on labour hire, and make changes to redundancy provisions that would have made it easier to contract out services.

After a poorly received round of CEO briefing sessions on the current EBA negotiations, Maribyrnong members voted strongly to take protected industrial action, and within a week management had withdrawn their claim to change the redundancy clause.

Just over a week after management had agreed to withdraw their claim around redundancies, staff started wearing badges and signing off emails with a note that they were taking industrial action. Just 24 hours before members were scheduled to strike, management came to the bargaining table with an offer that increased the study allowance by $1000 and training allowance by $550, increased the pay offer, and most importantly, introduced a strong clause around secure work and the use of labour hire staff. This includes a commitment to permanent work as the preferred method of employment, and quarterly reporting on the number of labour hire staff to the consultative committee.

This result was only able to be achieved by the ASU members at Maribyrnong because they were united and determined to improve their conditions at work.

And importantly, they were Stronger Together

Great support from local State and Federal MPs for ASUVicTas ‘s call for the City of Greater Geelong to reinstate almost 600 workers. Check out the letter from the MPs in the link below, strong stuff.

Together with the Minister for Local Government’s statement that councils shouldn’t stand-down workers (this happened after ASU branch secretary Lisa Darmanin wrote to the Premier), there’s a fair bit of pressure on the City of Greater Geelong to do the right thing.

Can you please share the letter from the Vic minister for local government to Councils here please?

Last week Geelong Council made the extraordinary decision to stand down over 500 of their staff in leisure and recreation. This took effect last Wednesday.

State and Federal Governments are digging deep to support workers and the community, it’s only fair that local government does the same, especially a Council like Geelong.

We are calling on Geelong Council to immediately reverse this decision. Federal and State MPs in Geelong agree with us.

The State Government needs to take urgent action to make sure councils don’t shirk their responsibilities like Geelong is trying to do.

Barry James Gough had no idea this happened glad they have been reinstated. Who got stood down can you PM me please

You cant reinstate if thier area of work is closed ie leisure centres ..... they should be REDEPLOYED to other areas like some other councils .... use them to do works needed like mulching .. litter collection in parks .... better than being in line at Centrelink.

Qantas want to rip off 20,000 of their employees whom they have stood down. We won't let them.

Qantas need to do the right thing and allow their employees to use their accrued personal leave when they are unwell or needing to care for a family member.

The Fair Work Commission has told them to listen to us and come to an agreement.Qantas has told its workers it will not pay sick leave. During the biggest health crisis we have seen.
So we took Qantas to court.
Today the Fair Work Commission told Qantas to talk to the unions. We agree.
Here’s what we have to say to Qantas: Pay your workers sick leave. Anything less in unacceptable.